The “Green Unit” is an Organized Rehabilitation Program approved by the Ministry of Health and owes its operation at H5a / 1351/2000 (protocol number FEK 877 / B / 2000) Decision of the Minister of Health.Green Unit as an Organized Program Rehabilitation has as its main object of actions the connection of mental health with the natural environment through the development of occupational therapies and creative employment.

The “Green Unit” has a logo depicting the human head, an olive branch and the blue of the sky.The organization of the “Green Unit” is the single(/united) legal entity of public law under the name GHT. “G. Papanikolaou “- P.H.T., Organic Unit Psychiatric Hospital of Thessaloniki, which has the supervision of its operation and belongs directly to the Hospital Administration.

The “Green Unit” has an Organization Structure in which all the groups of its activities are involved, while the relevant building and logistic infrastructure is provided for the implementation of its actions, supported by scientific and administrative staff, based on the relevant decisions of the Manager.

Hands that save minds

Donor of the “STAVROS NIARCHOS” Foundation at the Green Unit 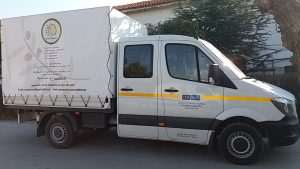